At London Fashion Week, models Jourdan Dunn and Herieth Paul walked down the runway for the Burberry Prorsum Spring 2013 show! (Love the metallic!)

Jonathan Saunders on the ideal client:  A woman or man who understands and wants a balance between simplicity and decoration in what they wear. {London Fashion Week}

Vivenne Westwood on the ideal Red Label client: My customers are the best ambassadors for my clothes. When people discover them, they seem to have an edge. Honestly, although I’m very proud of my customers, I also love to dress the supermodels. Glamour has a sense of archetype and I adore those archetypal beauties. Fashion is alive when it is being worn and talked about. {London Fashion Week}

Somali-Ethiopian Fatima Siad (best known for walking for Hermes, being the brand face of Herve Leger, and appearing on America’s Next Top Model) launched a personal website today – fatimasaid.com! Posted on Fatima’s official website is a biography page and editorial snapshots of her at work.

Here’s the Facebook message she posted up about her new online venture:

I’m really excited about it and would love for you to check it out and tell me what you think!

You can read my official biography, check out galleries of my pictures from throughout my modeling career, and connect with me via Twitter and Instagram.

Have a great night and lots of love!

Thoughts: I appreciate that Fatima is making moves to gain a bigger social prescene but someone needs to let her know that her last name is Siad & not Said. I blame this on MS Word Spell Checker! Harmless mistakes do occur!

Thoughts: I spent a great deal of my lunch break browsing through her website and I love not only the concept but the fact she used a natural hair model – Nneoma for her beauty shoot!

photo by Chioma for CulturalToast.com & Elizabeth Messina for Munaluchi Bride.

Cultural Style is a feature focusing on real style on and off the red carpet.

Last year Georgie Badiel and Aminat Ayinde attended the show as special red carpet guests. In fact what they wore to the ARISE Made in Africa Spring 2012 event was definitely from the African fashion industry. Georgie Badiel arrived in a futuristic Pierre- Antoine Vettorello number while Aminat went for a colorful colorblock satin silk ensemble.

From Twitter, the ladies shared their excitement for being apart of ARISE magazine’s fashion show.

@aminat_model: Its that time of the year and my 1st official FW show is; #AriseMagazine NYFW SS2013 show! 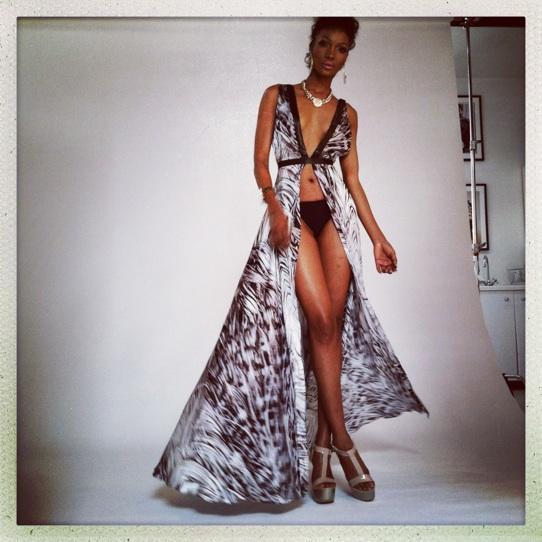 Angela Simmons attended her older sister Vanessa’s 29th birthday bash rocking a lime green mustard, gold and black Virgos Lounge “Bee” beaded clutch. Vanessa’s birthday celebration was held at the Sugar Factory in Las Vegas! Virgos Lounge needs to seriously consider making Angela Simmons a.) their spokesmodel for their new collection or b.) named one of their style items after her. Angela simply adores Virgos Lounge and CulturalToast.com is eager to see what Virgos Lounge red carpet worthy style item that her Nigerian-American stylist Kanayo Ebi*  will pick out for her next!

*Kanayo Ebi with her clients and close friends Angela and Vanessa

Unfortunately for the fashion-forward shopaholics who aspired to have this yummy accessory in their closet out there this clutch is currently sold out! (Damn it! There goes my birthday wish from me to me, lol!) Angela’s love for Virgos Lounge continues to grow. Love this support of celebrities embracing African fashion labels!

Cultural Presence looks at how celebrities and everyday people wear African fashion straight from the runway.

The Simmons sisters Angela and Vanessa were photographed wearing Virgos Lounge on and off the red carpet recently at the Art for Life Benefit event. Angela was seen in this Zaina dress with a funky fringe beaded bottom which you can purchase here.

I couldn’t help but fall in love with Eve’s wax print jumpsuit that she wore to the Intimately You Summit event in Philly. I also couldn’t help but notice that this jumpsuit is quite similar to the one Nadia Buari wore recently. It’s a cute look especially thanks to the lace detailing on the shoulder. Isn’t this a daring Aso Ebi inspiration, anyone?

CulturalToast.com is sending a huge congratulations to Dallas Mavericks NBA star Dirk Nowitzki and his new wife Jessica Olsson who got married over the July 15th weekend in a traditional Kenyan wedding! Dirk’s wife Jessica Olsson is of Kenyan and Swedish descent and Dirk is German professional basketball player! How cute and amazing are their traditional wedding outfits?!

It was a traditional kikuyu wedding ceremony commonly referred to as Ngurario.

The short version of the Kikuyu wedding, that is meant to announce to the community that the daughter is engaged, provided relatives from both sides with an opportunity to get to know each other and conclude ruracio (dowry payments) discussions.

When a couple goes through the ruracio phase, their wedding is officially recognized by customary laws.

There was plenty of fun and and plenty to eat and drink. The bride, Jessica was wearing a traditional Kikuyu garment and Dirk was in a dark brown traditional outfit with orange hues. Jessica was also presented with a kiondo by elederly kikuyu women. She had to demonstrate how she would go to the market and shop for her husband.

The NBA Star and Jessica Olsson held the ceremony over the July15th  weekend.  Jessica is born of a Kenyan mother and a Swedish father.

Cultural Loop is a must-read news rundown within the fashion & entertainment industry!