Halloween just wrapped up this past Monday but prior to that day nine-months-pregnant Nia Long was seen with her boyfriend Ime Udoka (Nigerian-American San Antonio Spurs basketball player) and her son Massai Jr at Hollywood’s hot spot, Mr. Bones. The bundle of joy will be Nia’s second child and Ime’s first. Nia and Ime expressed their happiness for the November 2011 issue of Ebony Magazine.

Tracee Ellis Ross celebrated her 39th birthday with boyfriend Bu Thiam (Akon’s brother & Senior VP of A&R at Def Jam) in Altanta. As you can recalled Tracee and Bu have been under the radar for awhile now. We first reported on these two when Tracee was in town filming her hit BET series, Reed The Lines.

We of course are drawn to what Tracee worn for her b’day bash/Watch The Throne After Party as evident by our Tumblr page! This black and white animal print mini was first worn by Keisha Buchanan at the D&G Party hosted by Net-A-Porter and Mr. Porter back in July. For her birthday celebration in Atlanta, Tracee paired the same get-up with droolworthy Azzedine Alaia lace-up calf hair platform boots. FYI: Tracee wore the same dress way back in July 2011 at Club Mansion.  We love that Tracee re-wore what she has in her closet! Shop the dress here!

Cultural Romance is dedicated to the romantic lives of high-powered celebrities. This Or That examines style trends on and off the red carpet. Sometimes it’s a fashion face-off or two looks that’s quite similar.

This Or That Edition: Opening Ceremony

African-inspired patterned Chloe Sevigny for Opening Ceremony embellished caridgan and shorts as seen on Solange Knowles and Tracee Ellis Ross marks our second edition of This or That. 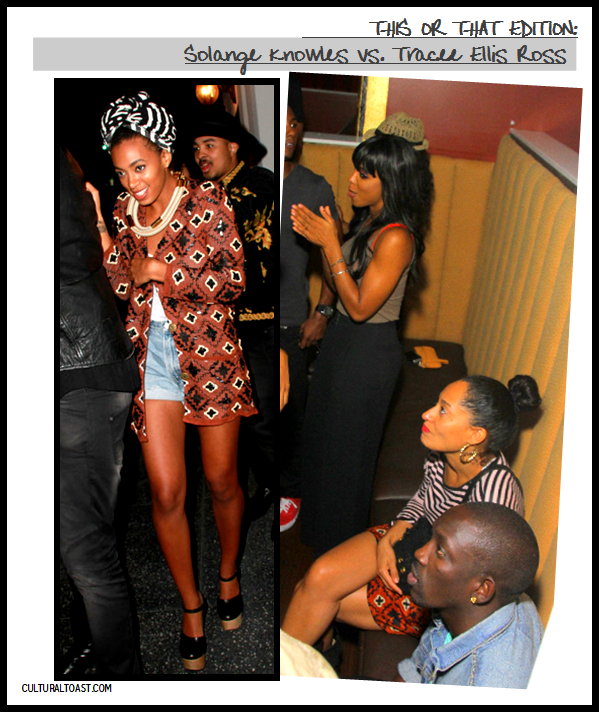 Solange first wore the look outside a Lexington Social House in Los Angles with her favorite nOir necklace. In between filming her upcoming BET series, Reed Between The Lines, with Malcom Jamal-Warner, Tracee wore the silk culotte shorts by Chloe Sevigny for Opening Ceremony to unwind at Atlanta’s Mansion Elan. We love how Tracee pair her look wtih a nautical-like black and white top.

This Or That examines style trends on and off the red carpet. Sometimes it’s a fashion face-off or two looks that’s quite similar.